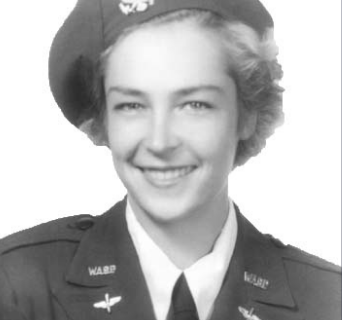 “We were given the opportunity to fly wonderful aircraft that women hadn’t flown. We were the experimental thing.” – Beverly Beesemyer (1918 – 2019)
When World War II broke out Beesemyer sought a way to join the war effort. It was in 1943, when she learned about a little-known opportunity for women – the WASP program.
Beesemyer paid for her own flying lessons until she had the minimum 35 hours of flight time to be accepted for WASP training at Avenger Field in Sweetwater, Texas. After graduation, one of Beesemyer’s duties was to train male pilots to use machine guns to attack enemy aircraft.
“I towed targets and they fired 50 caliber machine guns at the sock (target) I was towing,” she recalls.
Her plane was hit by errant fire once, but she wasn’t injured. But 38 of her colleagues died between 1942 and 1944 while transporting aircraft, conducting training or other military work.
Watch Beesemyer take flight at 99 years old here: https://youtu.be/D-4Dz9HMZFE?t=154