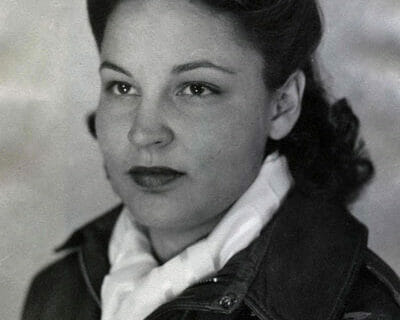 Born in 1919 in a cabin in Washington State, Mary Koth McCabe, WASP Class 44-1, was described as a free spirit who believed, “If you don’t enjoy life, it’s your own fault.”
After high school, Mary spent ample time on a Harley-Davidson, and eventually decided she wanted to learn how to fly. Mary worked as a florist, a swimming instructor and a truck driver to pay for flying lessons. Three of her friends and Mary pooled their money and purchased a plane.
Mary was one of some 25,000 women who applied to the Women Airforce Service Pilots program, and one of only 1,074 women to graduate. During her service, she ferried aircraft and was a test pilot. She flew a number of different aircraft including the PT-19, BT-13, UC-78, AT-17, B-26 and the AT-6 – perhaps even WASP Squadron’s AT-6 “Nella” that was used for training in Sweetwater, TX.
Shortly before applying to the Women Airforce Service Pilots program, Mary met Luke Vincent McCabe, an Army officer. The two married in late December 1944, after the WASP were disbanded, and had four children and 12 grandchildren.
Photo courtesy of Wings Across America – learn more here: http://www.wingsacrossamerica.us/web/obits/Mary_mccabe.htm