Memorial Day weekend is traditionally a time to honor those who gave their lives in service to their country, and is a special time for all Americans. For those fortunate enough to be associated with the Women Airforce Service Pilots (WASP) the Memorial Day weekend marks another important occurrence on the calendar. The Saturday before Memorial Day each year sees the return of the WASP to the former site of Avenger Field in Sweetwater, Texas for Homecoming. 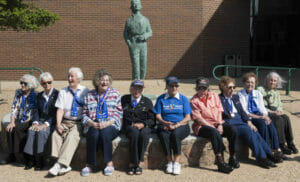 The WASP return to the former site of Avenger Field, in Sweetwater Texas, annually. 2017 saw 11 WASP make the trip (Edna Davis not pictured).

This 12th Annual Homecoming, hosted by the National WASP WWII Museum, featured aircraft demonstrations, an opportunity to meet the WASP, a dinner in their honor, and of course a memorial service for those WASP who had passed in the preceding year. 2017 also marked an important milestone for the museum, as they unveiled their exciting new building, constructed to resemble the original hangars used by the WASP more than 70 years ago. 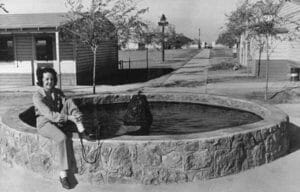 Photo: The wishing well was an important fixture of base life at Avenger Field. Women threw a coin in for luck when facing a check ride.

In addition to the festivities at the museum, one of the great moments every year is the return to the wishing well. Now on the grounds of the Texas State Technical College, the wishing well was a fixture at Avenger Field. The WASP would toss coins in it for luck if they were due a flight with a check pilot, and the tradition soon evolved to throwing their fellow trainees in when each completed their first solo flight. The WASP in attendance at this year’s event took up their positions along the well for the annual reunion photo, with a new face. Barbara “Bobbie” Heinrich (WASP 43-W-4) made her first appearance at homecoming, celebrating her 101st birthday alongside her fellow women pilots. 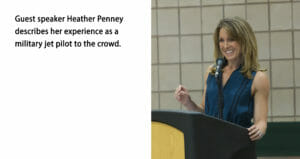 Photo: Heather Penney describes her experience as a military jet pilot to the crowd.

Following the visit to the wishing well, the museum hosts a luncheon. This year’s speaker was CAF National WASP Program Chair, Maj. Heather Penney. Penney brought the audience to tears as she explained how on September 11, 2001 she was scrambled to intercept one of the hijacked airliners. Penney said of the WASP, “Because of the WASP who broke the mold so many decades ago, I was able to serve the idea of freedom and democracy we call America.” 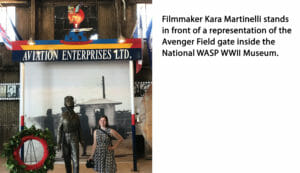 The luncheon also provided a unique opportunity for Kara Martinelli, of Hemlock Films to update the WASP and their families on the progress the CAF is making, particularly as it relates to CAF RISE ABOVE: WASP, our unique, immersive, educational film. This was Martinelli’s first Homecoming, and in addition to re-connecting with the WASP she interviewed last year, she was also able to scout the environs of Sweetwater, assessing what is left of the original Avenger Field and gaining an appreciation for the starkness of the West Texas landscape. All of this will be useful as we move towards principle photography for the film. 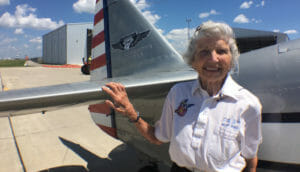 Photo: a Marty Wyall with CAF AT-6

Photo: This year we said goodbye to Marty Wyall, as her ashes were spread over Avenger Field, where she trained to be a WASP. Wyall is pictured here at the Appleton Airport in 2017.

Sadly each year sees fewer and fewer WASP able to make the journey out to Sweetwater. Those WASP who can make the trip are drawn together by their bonds of friendship, and commitment to remembering those who have “gone west.” This year’s memorial service included a touching send-off for WASP Marty Wyall, one of the CAF WASP initiative’s earliest supporters. As her ashes were spread across Avenger Field it was hard not to envision the boisterous lady who attended Oshkosh, and flew in the B-29 FIFI less than 12 months ago as we announced the beginning of this program.

As always, Homecoming was a truly memorable event, and the CAF WASP Initiative team extends a heart-felt thank you to the National WASP WWII Museum for supporting our educational mission, and inviting us to be a part of their celebration of these trailblazing women pilots.

Click here for more information about CAF RISE ABOVE: WASP or to make a contribution to the program.

Photo: The CAF Houston Wing AT-6 strikes a graceful pose at the WASP Museum.